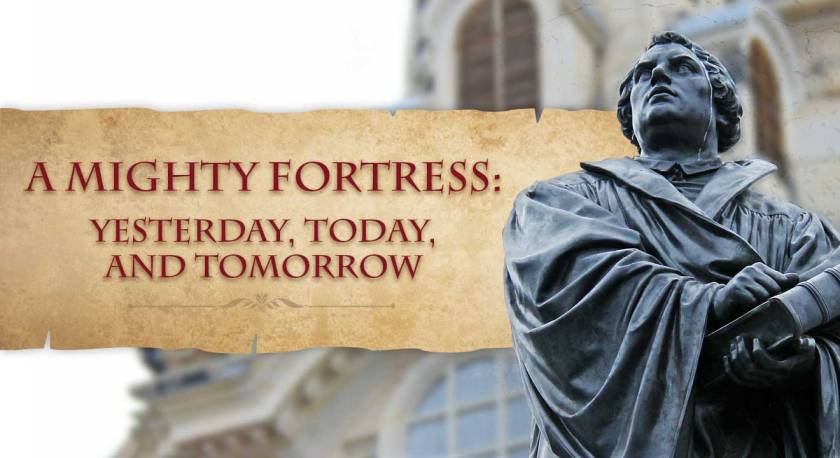 Lyrical works never last. After a decade or so, they often fade into oblivion due to the new trendy style of the next generation. The Beatles music has made an impressive run but has yet to be truly tested by time. A couple of band members are still alive and so are many of the people who popularized them as teenagers. The Beatles will surely go down in history, but will their songs still be sung in the generations to come?

There is one song, however, that has carried through generations, languages, and cultures. To this day, it is popular in this country but was born centuries before the United States of America drew her first breath. A Mighty Fortress still touches the hearts, minds and souls of the world today.

A Mighty Fortress was penned by Martin Luther – a former monk and the most influential leader of the Reformation. The song was written in the upbeat German folk-style of the 1520s. Originally written in Luther’s Germanic tongue, the hymn was translated many times into English. The most popular translation was provided by Frederick Henry Hedge in 1853. It is unknown when exactly Luther wrote A Mighty Fortress, but it is commonly agreed that he wrote it between 1527 and 1529.  It made its first appearance in the printing of Form und ordnung Gaystlicher Gesang und Psalmen, which was published in 1529. It is theorized to have been written in that same year. However, Louis F. Benson states in his book, A Study of Familiar Hymns, that, “…Scherer, the recent historian of German Literature, states with entire confidence that the hymn was written in October, 1527, at the approach of the plague. Luther’s biographer, Julius Kostiln, in the later editions of the Life, accepts this date as probably correct” (Benson 158).

It is believed that Luther wrote this hymn in his darkest hour: a plague was coming, Luther’s health was precarious, and a friend of his was martyred. Luther took great comfort in Psalm 46 and so was inspired to write A Mighty Fortress. The inspiration is crystal clear as Psalm 46 begins with, “God is our refuge and strength, an ever-present help in trouble.” A Mighty Fortress opens similarly with, “A mighty fortress is our God, a bulwark never failing.” Some consider the hymn to be a metrical paraphrase of the psalm. While there are many similarities, the hymn does deviate from the psalm and in doing so becomes its own.

The hymn is delightfully poetic. The rhyming is rich, and nothing is forced. Each verse flows seamlessly to the next, first stating the helpfulness and mighty power of God before delving into the cruel strength of Satan. One example of Luther’s extraordinary songwriting skills is in the third stanza, where it says,

The Prince of Darkness grim, we tremble not for him

His rage we can endure, for lo, his doom is sure

One little Word shall fell him.”

Benson considered A Mighty Fortress to be, “An imperishable hymn! not polished and artistically wrought but rugged and strong like Luther himself, whose very words seem like deeds” (Benson 160).

The melody is generally upbeat and jovial but has the unique gift of conforming to the emotion of any verse. For instance, there is a hint of sadness to the line, “Let goods and kindred go, this mortal life also.” However, the tune picks up again at the end with, “His (God’s) Kingdom is forever,” where it becomes firmer, more confident. Lutherans traditionally play the hymn on an organ or, if finances permit, a pipe organ. This type of instrumentation gives the song more power, further amplifying the power of God and the comfort that is drawn from that.

The hymn clearly rings with its message of God’s sovereignty and help in troubling times. The song is encouraging in the way it tells its listeners that their strength is not enough but they can rest in God’s arms while He fights the battle they could not hope to win themselves. Satan, though evil and powerful, cannot stand against the might of God. The music boosts this emotion – the melody swelling up with joy at the mention of God’s strength and care but softening when realizing the difficulties of life. The brilliant blend of music and words evoke a series of emotions: comfort, elation, and peace. These emotions lead the listeners into a serene but joyful mood.

While the hymn is not known for its pioneering ways in the musical world, it is famous for its historical role in the Reformation and Protestant Germany. Protestants found solace in it and so clung to it while being persecuted. Benson states, “It was sung in the streets; and, so heard, comforted the hearts of Melchanthon, Jonas, and Cruciger, as they entered Weimar, when banished from Wittenberg in 1547. It was sung by poor Protestant emigrants on their way into exile, and by martyrs at their death” (Benson 159).

Germany eventually grasped the hymn as well – as a source of comradery. C. Michael Hawn writes in his article History of Hymns: “A Mighty Fortress is Our God”: “Often called ‘the true National Hymn of Germany,’ the hymn spread rapidly and was sung on the battlefield of Leipzig in 1631 during the Thirty Years’ War (1618-1648). Heinrich Heine, the famous nineteenth-century German poet, called it ‘the Marseillaise Hymn of the Reformation’” (Hawn).

Benson wrote that A Mighty Fortress “is dear still to the German people; one of the hymns lodged in their memories and hearts, ready for the occasion” (Benson 160).

Luther’s much beloved hymn is nearly five hundred years old – a remarkable stand against time. It has skipped across oceans and languages, assuring millions of God’s loving care in trying times. The hymn is still sung in thousands of churches today, not only in Protestant churches but even Catholic ones as well. It touches the souls of both the elderly and the young and it is dearly loved by them. Perhaps one of the reasons for the hymn’s long life is that it sings of God’s eternal assurances – a reminder that is needed throughout life. Sometimes it can feel as though we are children again, petrified and sorrowful at the trials life has set before us. The song gives a sense of God’s fatherly touch on our shoulders, saying, “It’s okay. I’ve got you.”

And nothing is more comforting than that.

This is a text widget. The Text Widget allows you to add text or HTML to your sidebar. You can use a text widget to display text, links, images, HTML, or a combination of these. Edit them in the Widget section of the Customizer.